Articles by Kathrin G. Sustainable Development Palm Oil - The Good, The Bad, And The Ugly

Advantages And Challenges Of Exporting
By Tekle S.

Improving The Quality Of Decision Making
By Niladri R.
▸ More Most Clapped
Most Read

Advantages And Challenges Of Exporting
By Tekle S.

What Is A Healthy Company?
By Raymond H.

Challenges And Opportunities In The New Economy
By Alkistis A.
▸ More Most Read
Also Interesting ...

You Too Can Be A Giant Killer
By Roger H.

A Look At Competitive Intelligence
By Vernon P.

Six Successful Habits To Increase Productivity And Your Client Base
By Charles M.

Leadership By Persuasion
By Ajai S.

Palm Oil - The Good, The Bad, And The Ugly

Could you imagine that, while munching on your breakfast or doing your laundry you are supporting one of the worst crimes that are committed to our environment these days? Probably not, but unfortunately, it's quite likely the case. The reason behind is Palm Oil. Palm Oil is used in a myriad of products. The WWF estimates around 50% of packed items in the grocery shops to contain palm oil.

From margarine to lipstick, biscuits to candles, chocolate to laundry detergent, processed food to shower gel, palm oil is found in an incredible range of everyday products. The qualities of palm oil lie in the versatility and cheap production. Being semi-solid at room temperature, it's high melting point makes it an ideal product for cooking, baking, and frying. Animal fats have the same quality, but palm oil is by far cheaper in production, and the fruit offers a two-for-one deal as both, the fleshy outer part as well as the stone provide usable oil and can be separated for different purposes. But it's not only in our groceries. Almost 50% of the palm oil imported to the EU is used as biofuel. 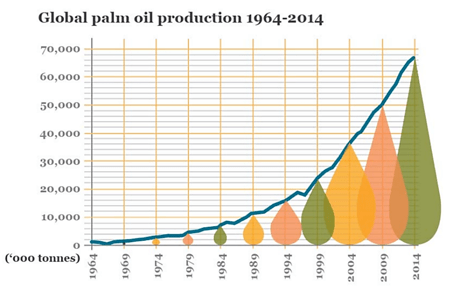 Considering the low production cost and high versatility, there is no alternative to palm oil at the moment. The demand for the product exploded in the late 80's and today we are using 66 tons of it every year. However, the downside of this wonder crop is devastating.

Oil palm plantations currently cover more than 27 million hectares of the Earth’s surface, which equals the size of New Zealand, and is mainly grown in South East

Asia, Africa and the Amazonas region. This land was not just available - the industries have invaded it. Forests and human settlements have been destroyed and replaced by monoculture plantations, containing virtually no biodiversity. Indigenous people who have inhabited and protected the rainforest over decades have been brutally driven from their land. Every single day, hundreds of acres of natural rainforest are being bulldozed away to make room for further plantations. The destruction of this indigenous forest is killing whole ecosystems. Borneo, for instance, is a mere paradise of biodiversity. Approximately 5,000 plants are endemic to the island and cannot be found anywhere else in the world. Among them the "Rafflesia", a carnivorous plant and at the same time the largest flower in the world, reaching over 100 centimetres (39 in) in diameter, and weighing up to 10 kilograms.

We don't know how many of these plants could be medical cures, helping to fight life- threatening diseases. Roundly 25% of Western pharmaceuticals are derived from rainforest ingredients while 99% of these tropical trees and plants have not even been tested by scientists, yet.

Deforestation doesn't only kill indigenous plants; it also causes a radical decline of natural habitat to species like Orang Utans, Borneo Elephants, and Sumatra Tigers, who are pushed to the verge of extinction. Almost 50% of the Orang Utan Population has been killed within the last ten years. The great ape that shares 97% of DNA with us humans could be extinct within the next three decades.

And it doesn't end here. Deforestation has an immense impact on our climate. Rainforests worldwide are absorbing carbon from the atmosphere and are responsible for approximately 30% of oxygen production. They naturally grow on peatland. Peat is an organic material created by the composting of plants. This condensed form of plant mass is storing vast amounts of carbon. Peat swamps are covering approximately 30- 45% of the tropics, representing around 10% of all peatlands worldwide. Half of this reservoir is located in Indonesia, the number one producer of Palm Oil. So why is this a problem?

The peatlands of Borneo formed over the past 20 million years and built up layers of peat that reach up to 20 meters, storing massive amounts of carbon. During deforestation large areas of the rainforest are cut and burned down to the ground to make space for further palm oil plantations. The smoke produced by the fires contains tremendous amounts of aerosols and toxic gases, which can cause severe health problems to humans and animals.

During the burning process, the carbon stored in soil and trees is being transformed into Carbon Dioxide and released into the atmosphere. Carbon Dioxide is a greenhouse gas and one of the major contributors to global warming. So the destruction of rainforest for palm oil plantations is not only eradicating whole ecosystems and animal species but is also causing severe health problems and contributes immensely to climate change.

Considering the high amounts of palm oil used today, it is not very likely that industries will stop using it over the next years. However, there is a way to grow palm oil in a more sustainable way that doesn't require further destruction of rainforest. The Round Table on Sustainable Palm Oil (RSPO), initiated byWorld Wildlife Fund (WWF) consists of representatives of Palm Oil Producers and NGO's in the effort to grow palm oil sustainably and prevent further deforestation. To date, the RSPO has helped to conserve nearly 190.000 hectares of land which equals the size of 250,000 soccer fields.

So what can we do in our day to day life to ensure we are not contributing to the loss of further habitat? When doing your groceries next time, watch out for products featuring the labels of RSPO or Green Palm. Those labels guarantee that no rain forest was burned for the production of the palm oil used in that product.

The majority of industries are still using the radical methods, but if we as consumers stand up against the destruction of our environment by choosing sustainable products over unsustainable ones, the industries have no choice other than adapting their production methods. Please support the WWF and other organizations in their efforts to protect our planet earth.

If this article is helpful, please share it with our family and friends and spread the word about the problems caused by palm oil. Together we can make a difference. I look forward to reading your thoughts and ideas!

This Article is authored / contributed by ▸ Kathrin G. who travels from Dubai, United Arab Emirates. Kathrin is available for Professional Training Work both Virtually and In-Person. ▸ Enquire Now.

6 min. Climate Change is a fact, even though certain high-ranking Politicians try to denounce it as a hoax to increase profits and sneak out of their responsibility ...
Sustainable Development

4 min. We reached a point in the history of humanity where we consciously need to pause for a while and reflect on the future of our businesses, our personal lives and the lives of future generations.
51
Back to top
Enquire
Unlock
Get Fees
Bookmark